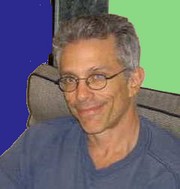 Yes, public speaking tips and Steve do go together.

You may know him as the scriptwriter of the 1994 cult classicThe Last Seduction.
Or perhaps you've met him through the pages of best-childrens-books.com or as the person behind The Shared Self Publishing Experience, a site devoted to providing writers with the information they need to publish their own work. But there's more.

Meet Steve Barancik humorous speech or monologue writer, and performer. If you're in Tuscon, Arizona you may know him already as he regularly performs at Monolog Cabin, the comedy club he helped found.

There's much we can learn from experienced speakers/performers and happily for us, Steve kindly agreed to an interview. Below he shares how he began public speaking or comedic story telling, his best public speaking tips, how he overcame the fear of live performance and his speech writing process.

Steve, you've been involved in writing across several genres for quite some time. There's been your script writing career and now your websites, best-childrens-books.com and The Shared Self Publishing Experience. What prompted you to begin writing for your own performances or speeches?

My sanity, I think. It had been many years since any of my scripts had survived the process unscathed. I just found my own words needing an audience and me being there for the experience. You start not to feel like a writer when you're only writing for studio executives.

I saw a group of TV writers in L.A. who were performing their own monologues for paying audiences. I was blown away...and yet I also was unintimidated. I thought to myself, "Not only could I do what these folks are doing, I know people in my little adopted hometown of Tucson, AZ, who could do it too." Then I just went about writing my first piece and bringing a group together. And so was born Monolog Cabin.

If someone had predicted years ago that you were going to perform your own material live, what would you have said and why?

I would have said, "Yippee! I guess I overcame my self-consciousness AND found a context where my approach would work." Or I'd figure they were talking about a speech I gave at a wedding. I roast rather artfully. (And I don't get invited to a lot of weddings anymore.)

Many of the readers of write-out-loud.com arrive because they want public speaking tips and they're terrified of giving a speech. They need help and they want it fast. Can you share how you overcame fear of public speaking?

Well, I can explain, but I don't recommend trying to duplicate it.

I was a manager at a telemarketing operation. Turnover was huge, so every week I had a new batch of trainees who had to be told how things worked. I guess you could say I learned to perform by doing the same material every week (training material) and just gradually "making it my own."

It helps that my performance urge is all about comedy. Laughter tells you when your material - and your performance - is working. I am still NOT secure enough to perform material that isn't funny. How would I know whether it was working?

Steve, you've obviously beaten the worst of the nerves because you're regularly out there on the stage in front of a live audience but does the fear of public speaking ever completely go? And would you want it to?

You know, I think I'm unusual that way. Everyone else I perform with - even professional touring comedians - have that "healthy" nervousness one hears about and you seem to be referring to.

Once I've rehearsed to a point I'm comfortable with, I am pretty much nerve-free. I'm confident in the material, and I've experienced enough success (i.e. laughter) on stage that if my stuff doesn't go over well, I'm okay with it. I laugh it off and don't beat myself up over it. I have plenty of other stuff to beat myself up over!

Could you share some of your speech writing tips? Sometimes people are frightened of public speaking because they don't know how to begin or structure their material. What process do you use to write your material?

I think I have too many tips to share them all, but I'll try to pull together a few.

How do know when you've been successful?
You've written your speech, rehearsed it well and delivered it but how can you tell you've given great performance? Is it feedback afterwards or is it audience response during your speech?

Well, laughter - as I mentioned - is key for me. But I think public speakers should be wary of letting others define the success of their performance. If you rehearse, you'll know what a good performance is for you, and whether you gave one.
If laughter is a goal, I recommend rereading your piece the day after your performance. If you're like most people I know, you'll remember precisely what got a response and what didn't. Rewrite accordingly.

Steve, we know your material is mostly humorous. We're told humor is so much harder to write and deliver than a more regular form of speech. Why is that? What's been your experience?

I have to disagree!

When I was writing for Hollywood, I was known as a dialogue specialist. When I spoke to groups of writers and aspiring writers, I often heard from people how hard they thought writing good dialogue was.

I would always laugh. Our lives are pretty much one running dialogue, and we generally only have a fraction of a second to decide what to say. How could these writers struggle with dialogue when they could take an entire hour or a whole day to come up with a single great line? When they could set up that single line by rewriting the line that came before it?

Remember also that humor is about delivering the apt and unexpected. As I mentioned before, reveal more than people expect, and make sure it rings true.

Most of us love to laugh. Could you give us some public speaking tips for using humor safely and effectively?

I'm lucky. I get to deliver humor in a context in which anything goes. So in addition to laughing at myself, I also get to poke fun at others.

What insights or personal benefits have you gained from stepping out and into public speaking?

Well, my ego has benefited hugely. I perform my material myself, so if it's well-received, there's no sharing of credit.

Could you share your both your worst and best public speaking moment?
When things go wrong in public speaking often we think we're going to quite literally die but, we don't. We survive and with the right guidance and encouragement we learn from the 'failure' and move on towards success.
Your answers will inspire readers to keep on, keeping on.

You know, my worst artistic moment wasn't about public speaking, but it was about public humiliation. I think it'll be more instructive than anything that ever happened to me onstage.

It was my first short story writing seminar, in college. It was a three hour class. Each class day was divided into two 1.5 hour critique sessions. Everyone would have taken the writer's story home with them and arrived at class ready to hold forth. Writing skills AND critical skills were developed. Work was ripped to shreds.

Well, I wrote my first short story, and this was the day it was to be critiqued. I was grinning from ear to ear. I knew it was a work of genius. I was in awe of everything I'd reached within and slapped onto paper. I figured that there would be nearly nothing to critique, and that inevitably we would spend most of my allotted hour and a half discussing which magazines and publishers I should be submitting it to.

The time came. My classmates pulled out their copies of my story. The instructor spoke.

"I think we can all agree Steve's story has a lot of problems."

And with that, he announced we would move on to critiquing the next piece.

I still flush at the memory. My piece wasn't even worthy of being picked to shreds. I was humiliated.

And nothing that could ever happen to me on stage would be worse than that. That's made getting on stage easier.

I tried something experimental once for Monolog Cabin. I stitched together 15 minutes worth of quotes from my young daughter and simply read one after the other. It was the best received piece I ever did, getting laughter AND tears.

And recently, a friend who happens to be one of the world's great elementary school teachers challenged me to perform a couple of my monologues for her fifth grade class. I thought she was crazy - that she'd end up fired and I'd end up arrested.

It was great. Kids are as smart as you trust them to be, and unlike when I perform in a club, I was able to see them react. That was great.

A BIG thank you to Steve for sharing his public speaking tips and more.

Would you like to read one of his humorous monologues? Here's 'Breakfast Food for Thought'. (You'll need Adobe Reader installed as it's a PDF.)

And if you have children you'll be kept fascinated for hours by his site best-childrens-books.com . It is a gem, especially his books on transforming child behavior through storytelling. Lying, temper tantrums, picky-eating...whatever the undesirable behavior is, there's a special story by Steve to help your child want to change.