How to choose a good argumentative speech topic

'Girls wear trousers whenever and where ever they choose. Therefore boys should be accorded the same freedom to wear dresses if they want to.'

That's an example of a current controversial speech topic. It does exactly what you want a good controversial topic to do: trigger emotional responses both for, and against it. Schools who require their students to wear gendered uniforms (dresses for girls and trousers for boys) are being actively challenged!

Controversial or argumentative topics teach us to evaluate ideas, to think through pros and cons, and to debate. Because they are often so polarizing, they make some of the very best persuasive speech topics!

What's on this page: 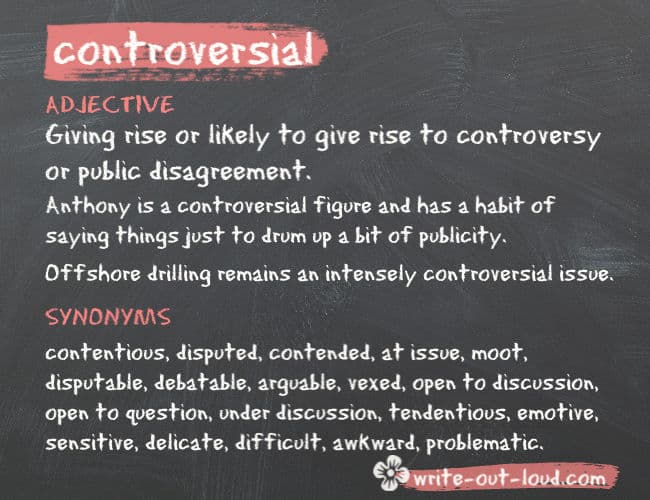 What are controversial speech topics?

The key word is controversial. It has a similar meaning to argumentative.

These are the hot topics, the sensitive topics, the ones we're currently working our way through.

Both sides of the debate are often convinced their point of view is right and their opposition's is wrong.

The benefit of delving into subject matter like this is being pushed to consider our own attitudes, values and emotional responses, which in turn helps makes us think more clearly.

History gives us examples of topics that once caused major strife. Now with the benefit of hindsight, we may wonder what all the fuss was about. Opinions have changed. What was once dangerous to discuss or even think about has become commonplace: unremarkable and acceptable.

Believing the earth moves around the sun, doesn't even raise an eyebrow now. But in 1633, in Italy, it was a highly controversial subject. The Roman Inquisition sentenced the famous astronomer Galileo to permanent house arrest over it.

Like their historical forerunners, these are argumentative or persuasive speech topics reflecting the current political and social issues impacting on, and shaping people's lives.

They can be broad, affecting everybody in the world, for example the global warming controversy (Does it really exist?), or narrow, concerning far fewer people. A good example of the latter are local conservation issues.

For instance in the area where I live there is a current, very lively, debate over land usage adjacent to an estuary.

Should a developer be given permission to close down the much used public walkway on the estuary edge in order to make it easier for his commercial development to go ahead? 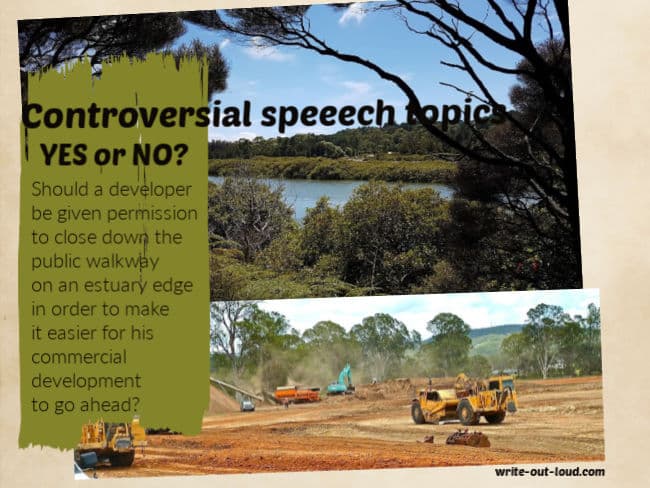 Regardless of their reach: global, national or local, controversial subjects draw impassioned debate.

And is there a middle ground or compromise acceptable to both sides?

How to choose a perfect persuasive speech topic

If you want your speech to be the best it can be, what comes next can make or break it.

Your first step is to consider ALL of the following aspects carefully before settling on a topic.

Who is your target audience?

A good speaker always considers their audience and shapes their speech around them.

Think about the people you intend to speak to:

What is the purpose of your speech?

An effective controversial or argumentative speech is well researched. This provides it with a rational, rather than purely emotive, base.

If you want to challenge or change opinion you will research:

Choose a subject that truly interests you. That way your enthusiasm will carry you through the research, writing process, and rehearsal, to delivery.

There are 242 persuasive speech topic ideas below for you to consider, split across four broad groups: food, babies and children, teenagers, and society.

What is more fundamental than the foods we eat?

Like air the breathe, the food we eat is essential to our survival and its history is a fascinating window into country, culture, and class.

Food is controversial. It always has been and always will be. It is that way because it is vital, and anything vital arouses deeply felt passions.

Have fun with these! 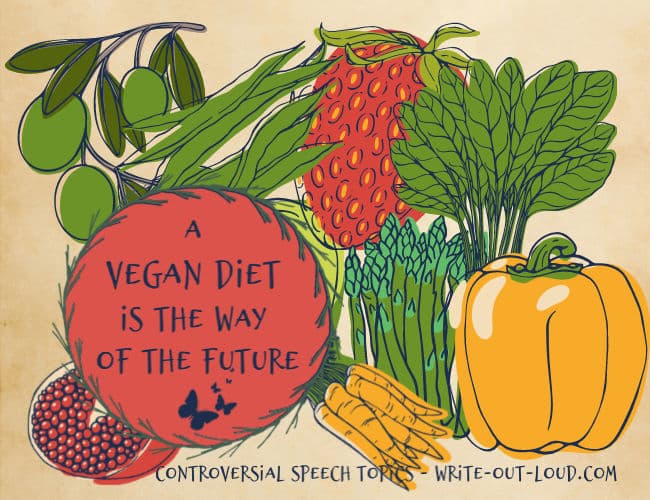 There are few topic areas more emotive than those to do with children. They are our future, our personal and family continuity, and often our reason for living.

How we shelter them, bring them up, educate and nourish them, literally and metaphorically, will always spark intense debates.

Topics about babies and children 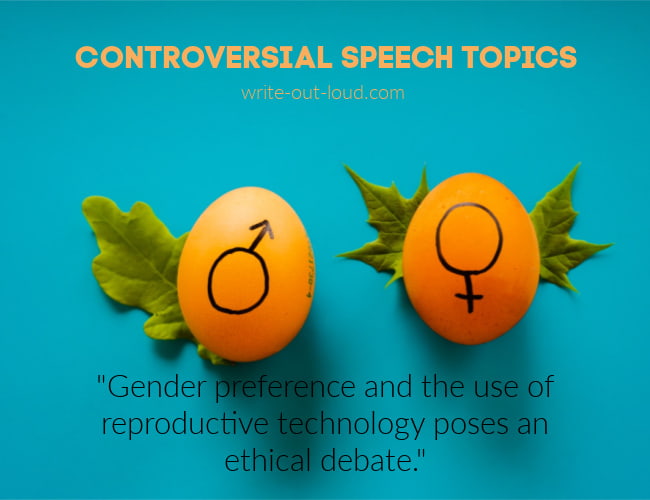 Topics for, and about, teenagers 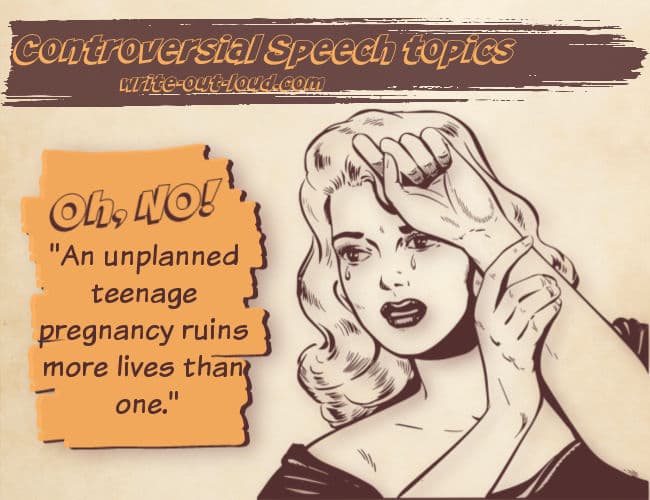 There are so many topic possibilities to be controversially passionate about!  Any one of them could make a good speech. 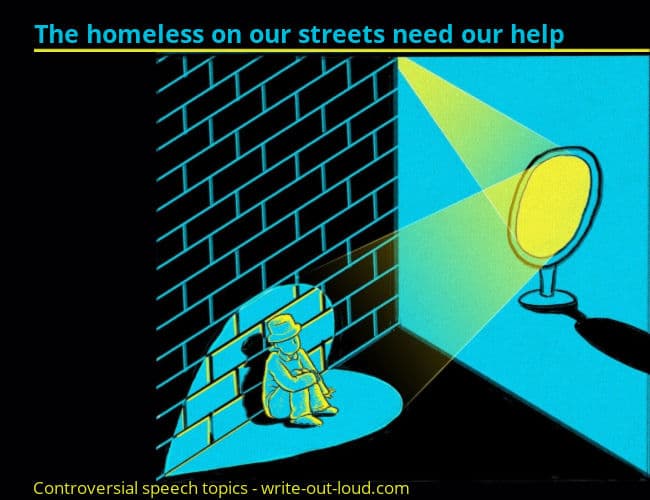 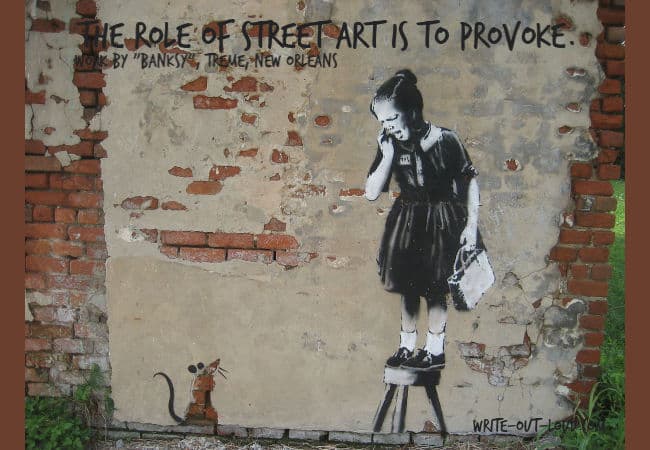 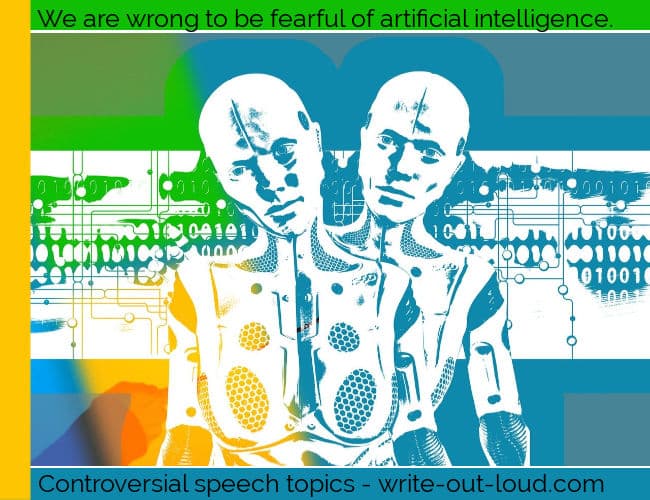 If you need more topic ideas ...

Try Questia -  You'll find an enormous list of controversial topics in alphabetical order, starting with Abortion and ending with Year-round school. Each topic area has an overview and an associated book or article list. It's an extremely thorough compilation and an excellent resource.


Get help with writing, rehearsing and more 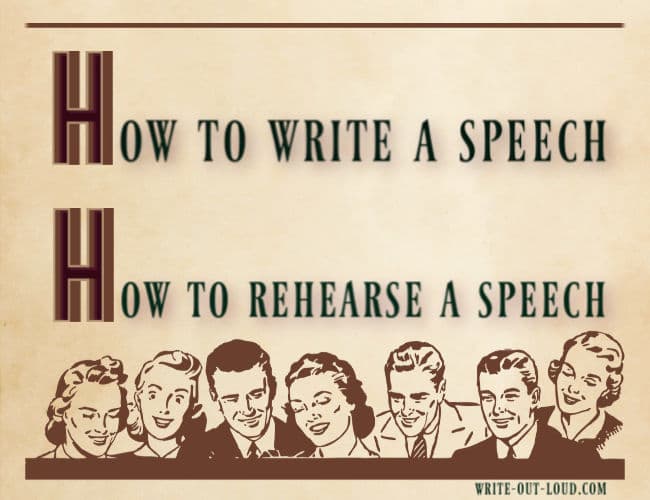 Should you need it there is comprehensive on-site help for every aspect of preparing, rehearsing and help to tame any anxiety you may be feeling about making a presentation. (There's enough here to make you very happy with the end result! ☺)