142 good cause and effect topics

Cause and effect ideas for speeches and essays

Cause and effect topics explore actions and their consequent reactions. They explain why something happened.

For instance, cause and effect analysis helps us understand questions or topics like:

Anything, and everything, can be looked at in terms of cause and effect.

There are 142 themed good cause and effect topics here - suitable for either a speech or an essay.

In addition, there's explanations of terms, examples and other material to help you prepare the best speech or essay you possibly can.

Challenge yourself! Choose a topic that connects in a real way with your audience and make your assignment count. ☺ 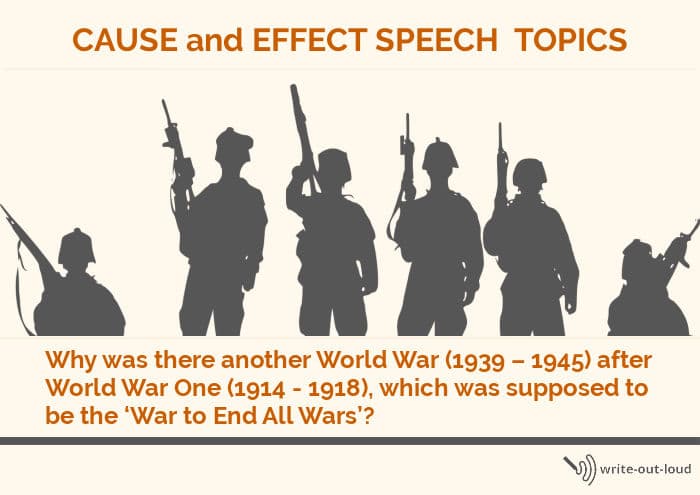 Use the index to navigate this long page easily

What are causes? What are effects? 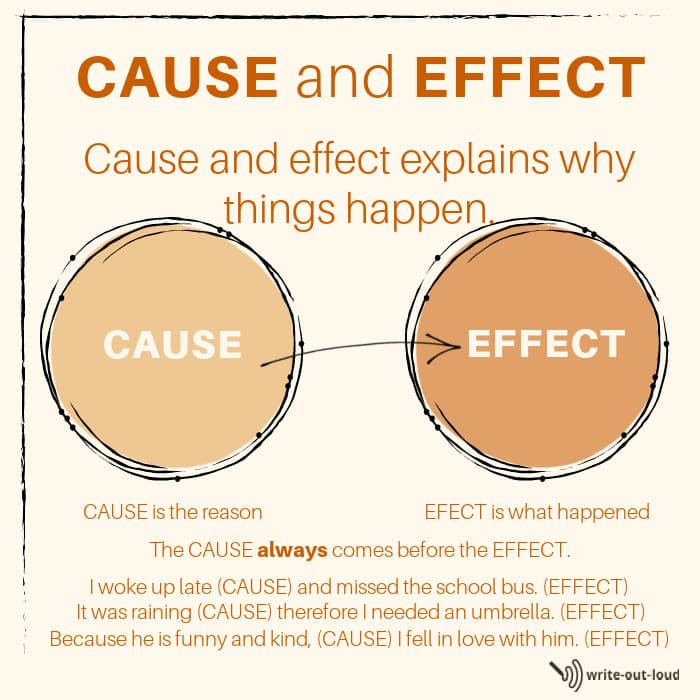 A cause is the catalyst setting up, triggering, or initiating a response. It always comes first.

The response or result is the effect or consequence of the cause. It always follows.

When the door slammed shut on my finger, I yelped in pain.

The cause is the ‘why’ preceding, coming before, the effect, the ‘what’.

‘The door slammed shut on my finger’ is the cause, or the reason why 'I yelped in pain’.

‘I yelped in pain’ is the effect or what happened as a consequence of the cause.

Cause and effect cannot exist without each other

Either one cannot exist without the other. There is no effect without a cause or a cause without an effect.

The causal chain: ongoing cause and effect

To illustrate here’s my 'the-door-slammed-on-my-finger' example continued. The effect becomes the cause giving rise to a new effect. And so, it rolls on.

When I yelped in pain, (cause) I gave my colleague such a fright she spilled her coffee. (effect)

When she spilled her coffee (cause) it splashed all over the notes she was getting ready to take to a meeting. (effect)

Because her notes were covered in coffee stains, (cause) she had to print them out again. (effect)

Because she had to print them out again, (cause) she was late for her meeting. (effect)

An effect may have one or multiple causes, and one cause may have multiple consequences.

For example, the outbreak of World War Two (the effect) did not have a single cause. Although the actual declaration of war between Britain and Germany was triggered by Germany invading Poland, that was just the immediate cause – the one prior to the event. Many more preceded it.

A fish bone diagram, a visual analytical tool, also known as an Ishikawa diagram after the man who invented it, will help you get a good clear overview of a complex topic like this one. 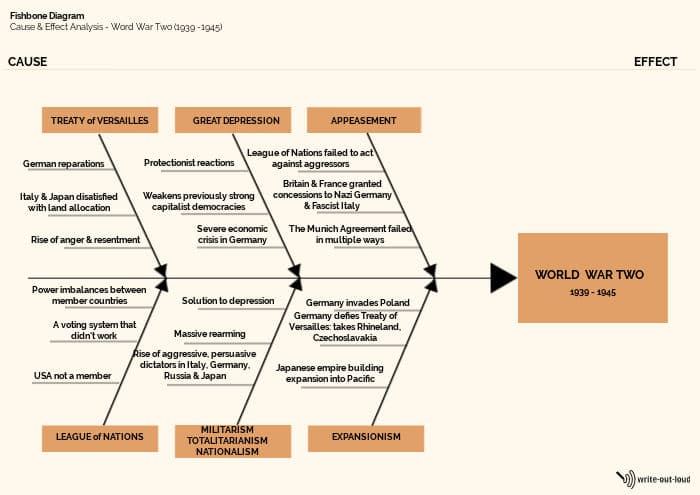 As you can see, the diagram takes its name from the skeleton of a fish.

Each major ‘bone’ arising from either side of its central ‘back bone’ represents one broad category or cause. Each of these categories or causes can be broken down into smaller ‘bones’ - a sub-set of causes within the major ones.

They all combine to cause the event named in the rectangle representing the head of the fish.

The diagram clearly shows there were many more reasons aside from Germany invading Poland that led to another world war, only twenty-one years after the end of the first.

The initial cause was the way the defeated countries were dealt with by the victors and how the victors treated one another at the Paris Peace Conference in 1919 where the details of the Treaty of Versailles were worked out.

Italy and Japan, allies of Britain, France and America, were dissatisfied with their outcomes while the conditions of the Treaty that Germany was forced to sign were deliberately humiliating. That simmering discontent eventually emerged as the rise of fascism in Italy, Nazism in Germany and statism (a mix of nationalism, militarism and “state capitalism”) in Japan.

And that's only part the story: the beginning. To give the full picture we have to add the categories or causes, as yet unmentioned: the failure of the League of Nations, the Great Depression, expansionism and the policy of appeasement.

Get a printable blank fishbone diagram

A completed fish bone diagram will give you an outline of the body of your speech or essay. It makes preparing your text, the words you're going to say or write, so much easier!

Add the conclusion and an opening and you’re ready to rehearse it.

Once you've chosen your topic get a printable blank fishbone diagram for your own use.

Useful words and phrases for cause and effect topics 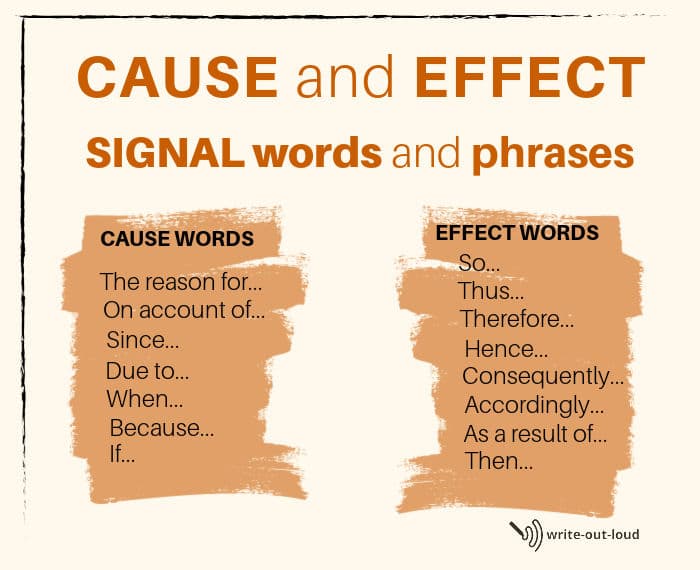 Words that communicate the relationship between causes and their effects are called signal words.

They’re signalling (telling) listeners (or readers) to connect the cause(s) with the effect(s). Signal words make it easier for them to understand what is being said. For that reason, you’ll want to use them in the piece you’re preparing.

Here are three examples. The signal words are highlighted.

As a result of his thorough preparation, he easily passed the test.

Due to Covid, we’ve been working from home.

The benefits of cause and effect topics for speeches or essays

Why do your teachers set cause and effect topics? (And the answer is not because they absolutely adore assessing their student's work. ☺)

It's because cause and effect assignments will help you:

Crooked cause and effect thinking

Because a cause comes before an event, we might be tempted to think a particular cause is the reason the event occurs. It may seem logical. But that is an assumption, one that is not always either trustworthy or the full story! 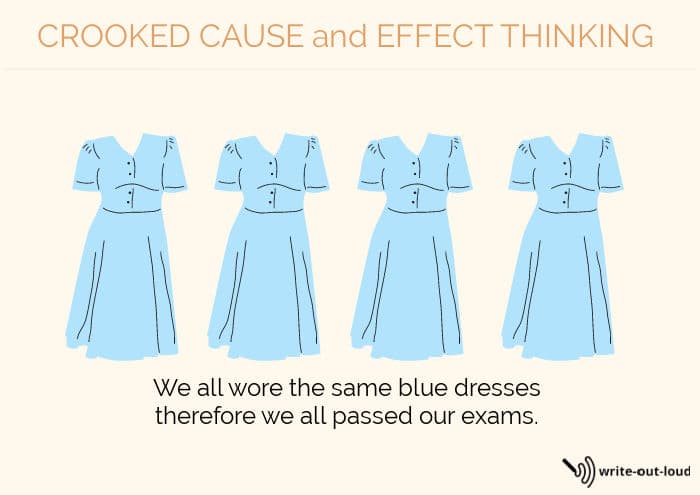 We all wore the same blue dresses and therefore we all passed our exams.

Really? Is wearing blue dresses why you all passed?

Did you all revise and study for the examination?

Did you all come refreshed, on time and ready to do your best?

That you all wore blue dresses is immaterial - a false correlation that has no bearing on the outcome. It is co-incidental!

It was raining when he crashed the car.

Did the rain cause him to crash? Or were there other reasons that could have played a part?


Was he driving too fast?

Was he over tired or over wrought? Maybe he’d worked a double shift or had a major argument.

Was he driving under the influence of either a drug or alcohol?

Could he see clearly?

What was the condition of the road?

Was there stock on the road? Escaped cattle from a farm bordering the road?

Had the car been serviced recently? Were the brakes working as they should?

Both are examples of logical fallacy: a faulty cause and effect connection. A fallacy is a mistaken belief based on unsound arguments and in these instances, the logic was flawed.

21 personal cause and effect essay or speech topics

Use these personal cause and effects essay/speech topics to explore your own experiences. Share the positive and the negative aspects to give a balanced response.

31 education and society cause and effect topics

These topics ask you to examine the causes and effects shaping education and society.

25 environmental cause and effect topics

It’s a small world after all! What happens on one side of it effects the other. These topics look at issues around how we understand, live with and manage our natural resources.

22 history cause and effect topics

Danish philosopher and theologian Søren Kierkegaard is frequently given the credit for the saying: ‘Life can only be understood backwards; but it must be lived forwards.’

In essence, it’s about the dilemma of only being able to get a clear overview of an event once it is passed yet having to live in the present. Hindsight – the ability to look back and reflect on the past, to see and analyze the patterns of action and reaction, helps us understand why we are where we are now.

14 natural science cause and effect topics

How does our natural world work?
Why are there stars in the sky?
If the earth is spinning so fast, why don’t we fall off?

What fascinates you about where we live? Use these topics as a starting point to find one you want to explore.

27 medical cause and effect topics

All of these topics relate to the science or practice of medicine.

Please note – be sure to change your page setting to landscape before you press print. The diagram will not display properly if the page is set to portrait.

How to complete your fish bone diagram

Enter your chosen topic’s result/event/effect in the blank rectangle (the head of the fish) on the right of the page.

Use the lines below each of ‘main cause’ rectangles to list secondary causes arising from it.

If you need to, refer back to my completed example to see how it works.

And a useful reference: Cause and Effect: Definition, Meaning, and Examples (prowritingaid.com)