Here's a collection of 6 superbly wonderful poems for kids, of all ages, to play with. They're perfect for at-home teaching.

They continue to endure, and delight. We love them for their exuberant joyful nonsense and the intoxicating whiff of topsy-turvy rebellion, naughtiness and magic they bring.

Break out the parlor poems!

Read them as duets, trios, or as a chorus. Add costumes.

Perform them live. Record them to share with friends and family.

Savor the language. Find the rhythms. Play. In short, have fun with them.

Get the printable. Listen to the audio.

You'll find a printable of all six poems to download at the foot of the page.

I recorded each of them too. The link to my audio is below each poem. 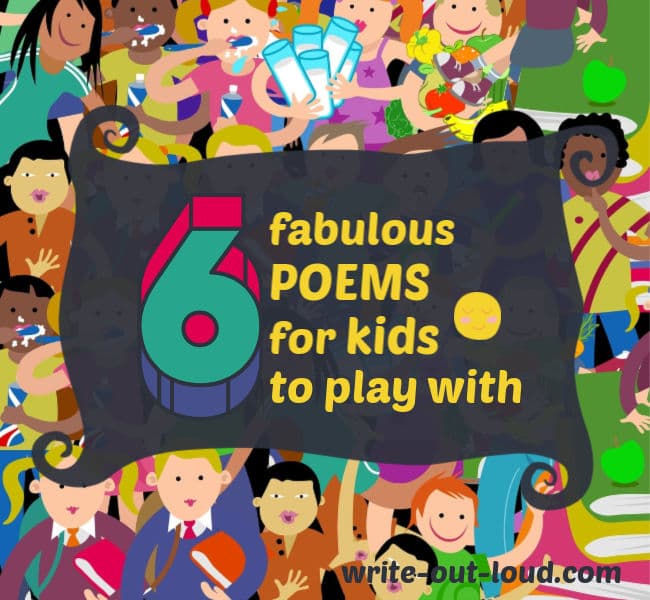 1. On the Ning Nang Nong

This is a nonsense poem by much loved Irish-British comedian and poet Spike Milligan. It first appeared in a collection of poems called "Silly Verse for Kids" published in 1959. 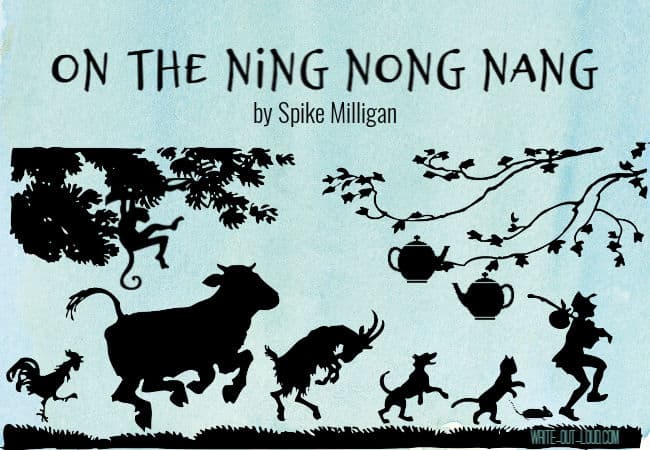 People sitting around a table having a cup of tea might "jabber": talk a lot. They might even "jibber": be nervous as they talk but their teapot? Never.

That aside, it's fun to suspend reality and pretend they do.

And the words: bong, ping, boo, clang, and jibber jabber joo are satisfyingly good to say. That's because they are all onomatopoeic. Their meaning is hinted at, or heard, in the way the word is pronounced.

How to work with the poem

This poem adapts well to group performance for people of all ages.

You could split it so one person narrates, while others say the sound words: bong, ping etc.

Or you could allocate lines and/or sounds around your group, either singly or in pairs, and then all come together for the last line.

Play as the inspiration strikes you. Don't be frightened to experiment.

If you find you're got a group of people who can't agree about direction, then give them all a turn to give it their creative best.

On the Ning Nang Nong
Where the Cows go Bong!
and the monkeys all say BOO!

On the Nong Ning Nang
All the mice go Clang
And you just can’t catch ’em when they do!

For more about Spike Milligan, here is an obituary published by the UK Guardian. 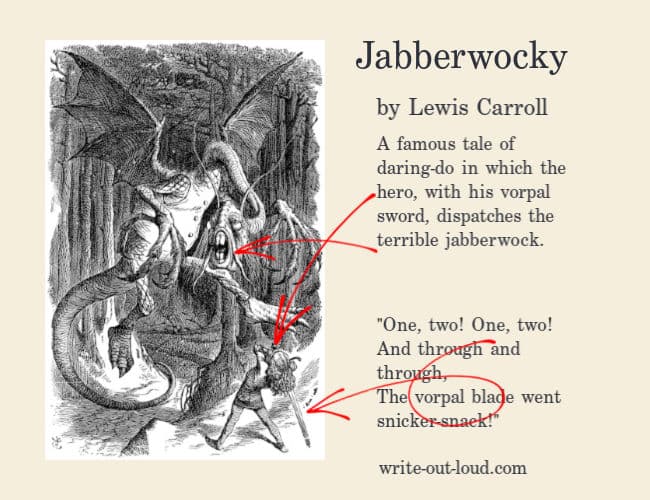 This is another glorious excursion into a make believe world; a tale, chock full of delicious nonsense words, about how a valiant hero defeats a terrifying monster.

Jabberwocky is a romp from beginning to end. We interpret the nonsense words as we see fit, roll with its rhythms while relishing Lewis Carroll's use of alliteration, assonance and consonance which makes the sound of the language so juicily satisfying.

The poem was first published in 1871, as part of the sequel to Alice's Adventures in Wonderland, Through the Looking Glass, and What Alice Found There. It's been a favorite of every generation since. (That fearsome creature in the image above is the original illustration by English illustrator Sir John Tenniel.)

Read it solo. Turn it into a group performance. Devise SFX* to underpin the words. Split it into sections and allocate the parts around your group. Make a play, or a puppet show, of it with a narrator, hero, the hero's father, the jabberwock etc.

What happens if you say this part slow? Fast? Loud? Soft? As if you are angry, a news broadcaster, ...

Just play. Have fun with it. It's a poem and fortunately, poems don't bite or break. ☺

For more about Lewis Carroll.

*SFX (Sound Effects) Sounds that add 'color' or depth to the poem. When I've worked with classes we kept our SFX simple: hand clapping, foot tapping, thigh slapping, hand rubbing sounds, shhhhhhh sounds for wind, repeated b-b-b-b, t-t-t-t etc sounds, animal sounds ...  If you have a group of three or more people, at least one could be your SFX expert.

And now here's the poem -

’Twas brillig, and the slithy toves
Did gyre and gimble in the wabe:
All mimsy were the borogoves,
And the mome raths outgrabe.

“Beware the Jabberwock, my son!
The jaws that bite, the claws that catch!
Beware the Jubjub bird, and shun
The frumious Bandersnatch!”

He took his vorpal sword in hand;
Long time the manxome foe he sought—
So rested he by the Tumtum tree
And stood awhile in thought.

And, as in uffish thought he stood,
The Jabberwock, with eyes of flame,
Came whiffling through the tulgey wood,
And burbled as it came!

One, two! One, two! And through and through
The vorpal blade went snicker-snack!
He left it dead, and with its head
He went galumphing back.

“And hast thou slain the Jabberwock?
Come to my arms, my beamish boy!
O frabjous day! Callooh! Callay!”
He chortled in his joy.

’Twas brillig, and the slithy toves
Did gyre and gimble in the wabe
All mimsy were the borogoves,
And the mome raths outgrabe. 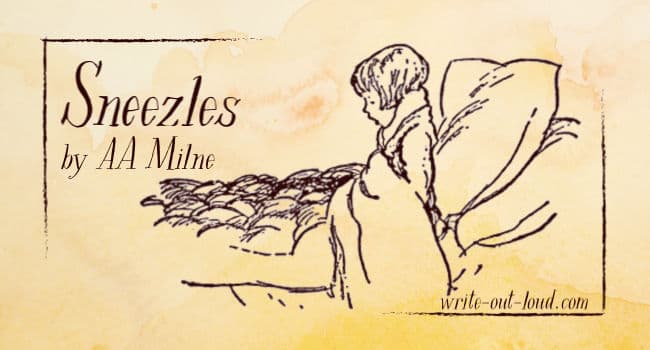 Along side that the rhythm and rhyme bounces us through the story of how Christopher Robin feigned illness to get attention. We feel the urgency his parents feel, as they try to work out what is wrong, and resort to getting specialists in.

Although the poem uses "nonsense" words we understand them because they are not very far removed from real ones. Eg. reazles and reasons, teazle and tease.  Even phtheezles is believable as the name for a serious disease.

Try it out loud. Use the punctuation to help with delivery.

Where a line has none it "wraps around" or "flows into" the next. The technique is called enjambment. When you say the first line, the one without punctuation, you don't pause before you begin the second. Instead you indicate the beginning of the second line with your voice - a stress on the first word.

Experiment. You'll hear it and realize it pushes the pace along as the story escalates from a very common, not particularly serious complaint to the possibility of something much more.

For more about AA Milne.

Christopher Robin
Had wheezles
And sneezles,
They bundled him
Into
His bed.
They gave him what goes
With a cold in the nose,
And some more for a cold
In the head.
They wondered
If wheezles
Could turn
Into measles,
If sneezles
Would turn
Into mumps;
They examined his chest
For a rash,
And the rest
Of his body for swellings and lumps.
They sent for some doctors
In sneezles
And wheezles
To tell them what ought
To be done.
All sorts and conditions
Of famous physicians
Came hurrying round
At a run.
They all made a note
Of the state of his throat,
They asked if he suffered from thirst;
They asked if the sneezles
Came after the wheezles,
Or if the first sneezle
Came first.
They said, "If you teazle
A sneezle
Or wheezle,
A measle
May easily grow.
But humour or pleazle
The wheezle
Or sneezle,
The measle
Will certainly go."
They expounded the reazles
For sneezles
And wheezles,
The manner of measles
When new.
They said "If he freezles
In draughts and in breezles,
Then PHTHEEZLES
May even ensue."

Christopher Robin
Got up in the morning,
The sneezles had vanished away.
And the look in his eye
Seemed to say to the sky,
"Now, how to amuse them to-day?"

4.  The Owl and the Pussycat 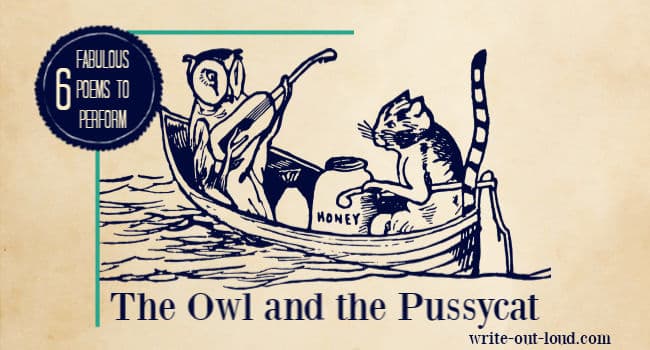 This poem brings us back to fully fledged, much loved nonsense!

Edward Lear's poem The Owl and the Pussycat has delighted people since it was first published in 1871. You'll find dozens, if not hundreds of versions of it. It's been set to music, filmed, parodied...

The Owl and the Pussycat is a romantic tale of true love. This unlikely pair sail away, leaving the real world behind "to the land where the Bong-tree grows". Between them they have everything they need: love, honey and money. Their happiness is made complete when they buy a ring from a pig,  are married by the turkey who lives on the hill and dance "hand in hand on the edge of the sand by the light of the moon."

Again play with it.

Say it out loud. Listen for the rhythms, and the savor the sounds.

Try it as a chorus work.

Try it with SFX of your own devising - gentle ooooh, aaah sounds, a beat ...

The image above is Edward Lear's original illustration.

Listen to The Owl and the Pussycat

The pace of the poem, set by rhyming couplets, is frenzied and frantic as the Whatifs large and small, ridiculous and real, tumble unbidden to "party all night long" in the speaker's mind.

The chaos pauses when an answer is finally given, then starts all over again.

I've found the poem useful when working with middle school and above, because of its humorous and accurate portrayal of the numerous anxieties besetting the age group.

Try it fast. Try it slow. Loud. Soft. Whispered. Shouted and all the variations in between.

Allocate lines. Decide on the shape of the sound. Does it build from very quiet to a crescendo? Does it ebb and flow? What is the tone? Mean? Kind ?  Experiment.

For more see Shel Silverstein. Check the learning resources section. You'll find downloadable lessons and activities based on his poems.

6. Ickle Me, Pickle Me, Tickle Me too 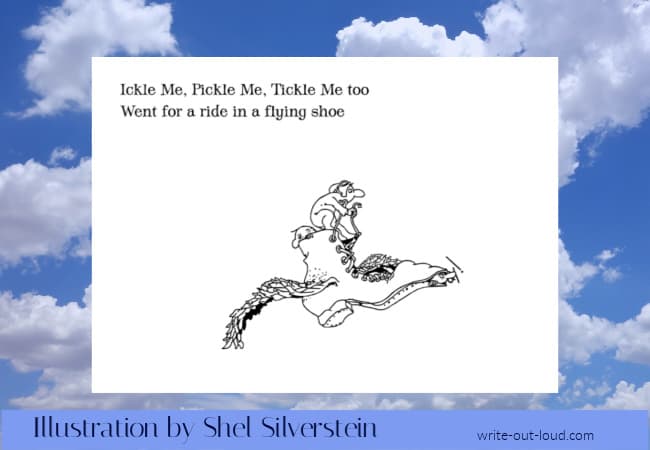 This is another gem from Shel Silverstein - the whimsical adventure story of three friends, Ickle Me, Pickle Me and Tickle Me, who go flying in a shoe. Alas, they never return to the land that they knew.

Do check out Shel's own magical rendition of it here: 6 animations of stories and poems by Shel Silverstein

And please don't let his interpretation stop you from finding your own way to share the story.

Instead be inspired. Go ahead and have fun.

Listen to Ickle Me, Pickle Me, Tickle Me too

Just one more for good measure.

This is Dr Suess's almost-impossible-to-get-right-without-an-enormous-amount-of-effort tongue twister, About Socks.

Despite torturing and tangling tongues, it is fun.

Give me the gift of a grip-top sock,
A clip drape shipshape tip top sock.
Not your spinslick slapstick slipshod stock,
But a plastic, elastic grip-top sock.
None of your fantastic slack swap slop
From a slap dash flash cash haberdash shop.
Not a knick knack knitlock knockneed knickerbocker sock
With a mock-shot blob-mottled trick-ticker top clock.
Not a supersheet seersucker ruck sack sock,
Not a spot-speckled frog-freckled cheap sheik’s sock
Off a hodge-podge moss-blotched scotch-botched block.
Nothing slipshod drip drop flip flop or glip glop
Tip me to a tip top grip top sock.

Listen to me stumble through About Socks. ☺ 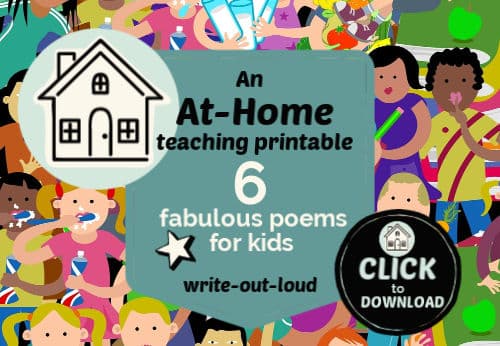 Seven tongue twister games - instructions and printable to download. Suitable for all ages.

40 image starters or picture prompts for impromptu speaking and story telling activities. Adaptable for all ages.

PS.If you're unsure about how to approach reading poetry out loud start with this page. It will help: how to read poetry aloud.