How to write a poem in free verse

- step by step instructions, with examples

Learn how to write a poem to include as part of a special occasion speech: a wedding, engagement, birthday, retirement or funeral.

Your original poem, the gift you've personally spent time hunting down words for, and sweated over,  will make the most vivid and cherished of memories.

What do you need to begin?

Very little.  Just some paper, a pen, time, and willingness to explore possibilities. 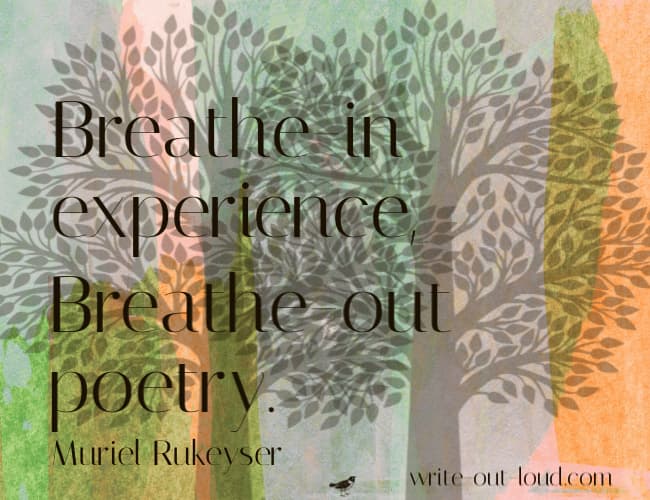 You also need to put aside the inner critic - the voice prattling on in the background of your mind, commenting, unhelpfully, on what you can, and can not do.

It's easily recognizable because it will be muttering mean little gems like this:

Thank that mean critic for their concern. Let him/her know you're up to handling the task, send him/her into time-out and firmly close the door. Goodbye.

Crafting a poem is an ancient and honorable activity - worthy of your time and effort.

And yes, you are going do it.

Did you know poetry pre-dates writing?

Before there were written languages people all over the world remembered and passed on their important stories through oral poetry.

They used predictable rhymes and rhythms based on the natural flow of breath and beat of the heart because it made them easier to recall.

These ancient poem or story tellers were revered as they were the memory keepers of cultural and community history. Without them there was no continuity.

For more read an overview of the history of poetry.

We're going to focus on how to write a poem in free verse, that is verse, or poetry, without strict rhyme schemes or meter. You will still use elements of poetic or figurative language for that is what makes your poem, a poem.

If you don't understand, don't worry. You'll find out more about poetic or figurative language later, further down the page.

My understanding is that free verse uses most of the attributes of structured poetry but in a non-structured way.

For example you will not find a regular beat or meter running through its lines. There will be no recurring rhyme scheme.

What will be present is the language we recognize as poetic. It will be precise, concise and condensed. The pictures it conveys will be concentrated.

As we read and experience the poem it will resonate on many levels, each new finding arising from yet another discovery of another level, or layer of meaning.

The story of the poem or its central idea has been compressed. It's only when we pause to unpack it that we find the rest.

Here's an image I like to use to help describe the process of discovery. 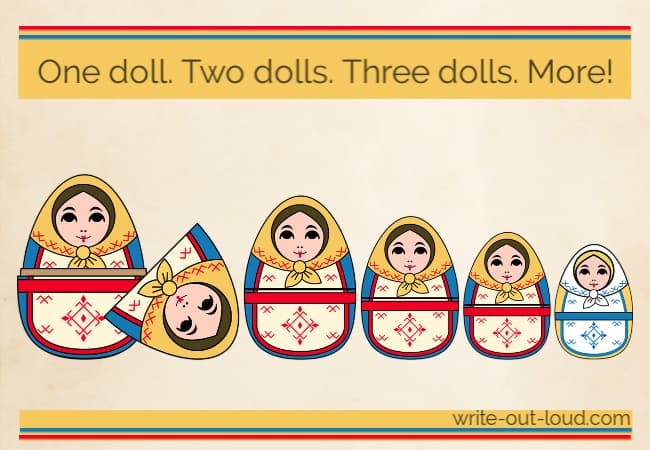 At first a Russian babushka (grandmother) nesting doll appears as a single entity. It seems to be just what we see. Nothing more. Nothing less.

And then the unpacking begins.  We see more and more dolls arising out of the first. This, to me, is the poetic experience, multi-layered and springing from one source.

Let's begin your voyage of discovery, the journey toward your own free verse poem.

The starting point is finding what or who you want to write about.

On a fresh sheet of paper begin a brainstorm. Put the trigger or seed for the poem in the middle. This is the name of the person, thing, or event you want to write about.

It might be a color. It could be a sound, a piece of music, a way of smiling, a habitual phrase a person used to say, a piece of clothing, the way a person walked or talked... It is whatever comes to you.

Think of your senses; sight, sound, smell, feeling and taste. What you want is vivid representations for each. The more direct and specific, the more evocative they will be.

Give every new, or fresh idea, its own space on the paper. You'll end up with a sun-burst pattern, your trigger (subject) in the center surrounded by raying clusters of words.

Here's an example using the phrase "My Father" as the trigger. 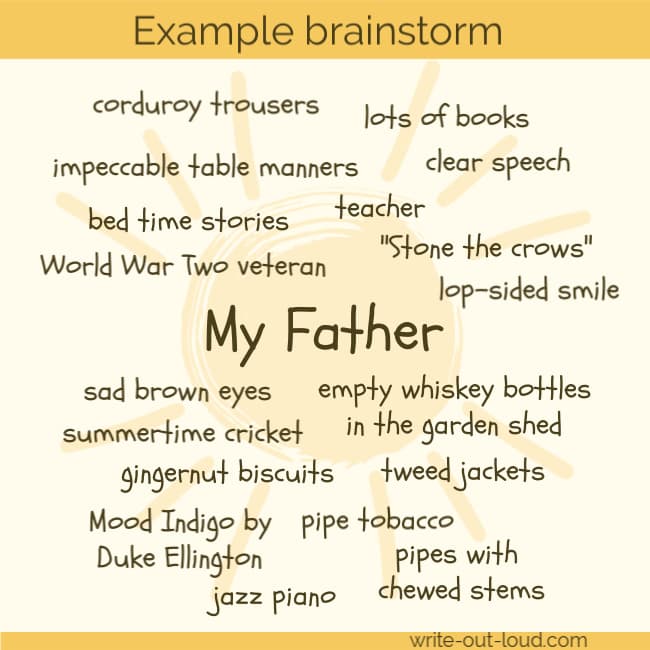 Once you've done as much as you can, stop and review what you've got.

Whatever stands out is asking to be explored some more.

Allow yourself to free-wheel through your notes, adding whatever comes to mind.

Again, DO NOT EDIT! You can do that later. For now you are playing, giving permission to your imagination to rumble through the treasure trove of your memory and bring back its findings.

Add to your notes

For instance I went back to my original brainstorm notes about my father:

You'll find that you ignore some of the threads you started with in favor of others. That's fine. That's part of the process. You do not have to use everything you thought of. Go with the idea that pulls up the strongest images and feelings.

Here's the result of my playing with the "jazz piano" thread from the brainstorm about my father above. 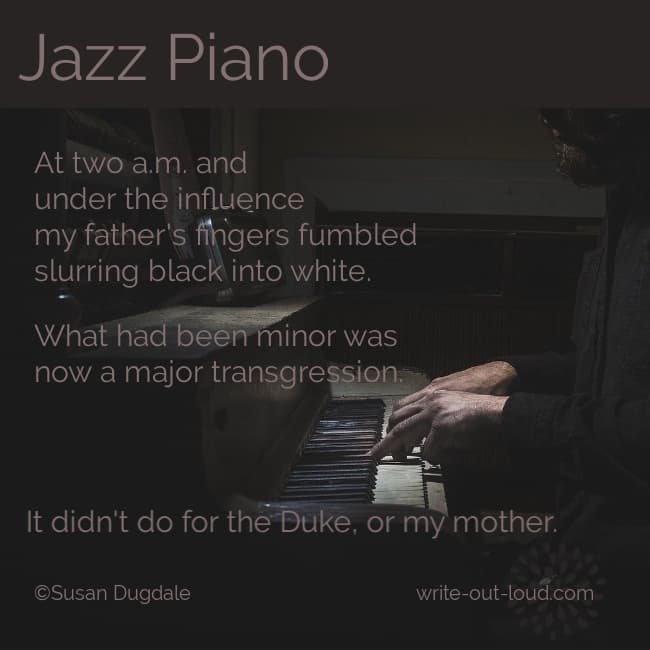 What I did was take the phrases I'd generated and arrange them on the page. I kept chipping away, changing them, over and over again, until I was satisfied I had the most evocative and honest words possible.

For example, my first draft began:

"At two a.m.
under my father's fingers black slid into white"

On reading this aloud, and thinking about it, I realized I hadn't got the main reason for the notes sliding into each other. So I started again.

I wanted to get the whiskey in but I didn't want to say, "he was drunk". Instead I wanted my experience of listening to his piano playing when he'd been drinking to come through.

I went back to brainstorm again. This time I came up with "under the influence" and "slurred" in place of "slid".

The phrase seemed apt to me because after a steady flow of whiskey he was definitely "under the influence" and becoming less capable of driving/playing his piano accurately. I thought the "driving" association was obvious and strong enough to use.

I substituted "slid" for "slurred" because "slurred" carried more detail. When a person is intoxicated it's not only their fingers that fumble. Their words do too and "slurred" was the richer word. It captured what happens to speech, thought, fingers and music.

"Under the influence" black slurs into white in many ways. Nothing is quite clear and boundaries are breached.

I liked the rewritten opening a lot better.

The next two lines tell what used to happen and contain several "plays" on words. "Minor" and "major" refer to the keys a piece of music is written in, as well as to the escalating annoyance my mother felt about my father's late night "under the influence" piano playing.

I included a reference to Duke Ellington in the last line because it was his music my father always tried to play. The line itself is a parody on a common English saying, "It wouldn't do for the Queen." It means not good enough, and is used to remark on anything slipshod: sloppy service or careless workmanship.

It works because of the royal connection to the name Duke.  Duke is a royal title and Duke Ellington is royalty in his own way. Through linking my mother to him, I've also conferred royalty on her whilst putting her beyond my father  - out of his reach, and above him.  The line clearly shows her attitude. She was not amused.

And I've imagined it didn't do for the Duke either, because he wouldn't like to hear his music badly played.

Does it work? Is it good poetry? Does it spring alive for you? Would I use it in a speech? Perhaps. It would depend on what the occasion was and who the audience were.

I hope you're ready to experiment for yourself. Get a blank sheet of paper and begin for that is really how to write a poem. Start. Put down a word. Write.

Below are brief introductory explanations and examples of the more common figurative or poetic language devices. You'll find them in free verse as well as traditional poetry.

Some are "sound" devices that come alive once the poem is said aloud. Others are "imagery". You see them in your imagination. Once you've got a poem underway see how many of them you've used without being conscious of it.

And, lastly try playing with these prompts 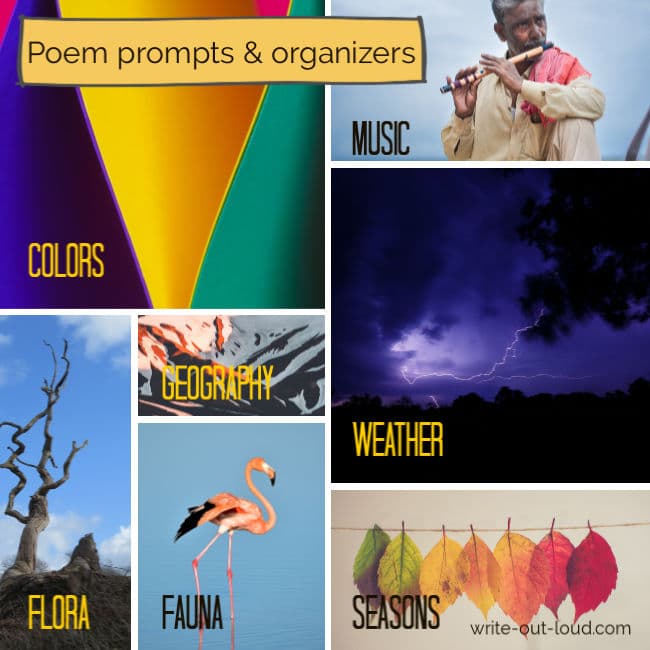 They're fun and can help with shaping a poem.

There is no one right way to write a poem. There are many.

What I know is once you start allowing yourself to really play with words it becomes addictive.

Go well. Try it and see. Dare to write-out-loud!