How to build self confidence in a child

Speech and drama activities are an ideal way to build self confidence in a child. If you have one who is anxious or afraid of speaking up in front of a class, adults, or perhaps even their peers, the suggestions and activities outlined below will help you, to help them.

They range from ideas suitable for little children just learning to string sentences together to ones for kids up to around middle school age.

You'll see, once you delve into them, they're really easy to set up, and many fall into the, "Of course. That's just commonsense!", category.

While it's an understandable response, many of us, myself included, don't naturally have this sort of commonsense! We don't automatically know the better ways to encourage a child to speak up. We have to learn them.

The positive benefits children receive from these activities will spill over into all areas of their lives. Effective communication skills, being able to speak up for themselves and to speak on behalf of others is empowering.

What's on this page 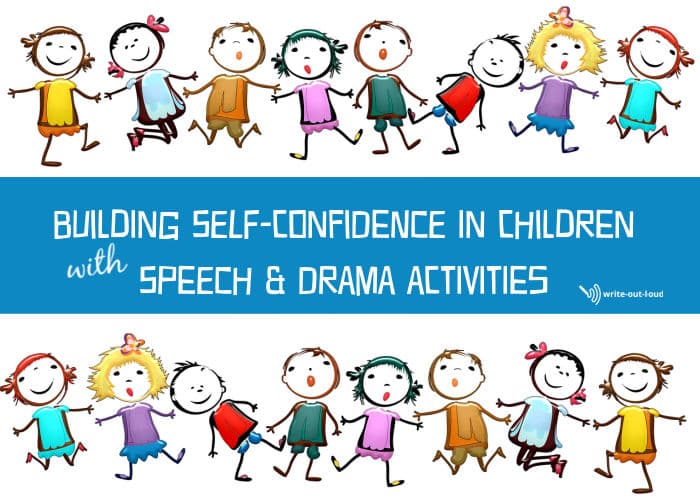 Being afraid of public speaking is a fear acknowledged by many adults.

That children are afraid of it too, shouldn't really be a surprise. What I find more of one, is that their fear often goes unchallenged, all the way from childhood through to adulthood. These children become the grown-ups who frequently say they would rather "die" than make a speech.

The truth is not, that talking in public is a deadly disease. The real truth is many people, children included, fear being singled out in front of others.

Being publicly "looked at" and "listened to" is the problem. People fear being seen, for fear they are "not good enough" or that they will publicly humiliate themselves in some way. Being laughed at, making fools of themselves, or dismissed as stupid is the pain they're avoiding.

The simple remedy to side-step risking exposure many people, including children, adopt is to keep out of the public eye and their mouths shut. However that solution is a boomerang.

The cost of NOT speaking up

The child who is too frightened to talk up or feels so self-conscious they can't relax and join their peers in games loses out. They are often overlooked by their classmates and teachers in favor of bolder children.

The more a child is marginalized the harder it becomes to join a group or allow themselves to be seen. Then, when forced by circumstance, like having to give a formal speech in class, their discomfort and subsequent embarrassment or humiliation, is a self-fulfilling prophecy.

How to break the cycle of fear

The non-threatening drama and speech activities below will help break the cycle. Before you rush to use any of them please make sure you:

About these speech and drama activities

The activities are separated into "speech" and "drama" because although inextricably linked, they are different.

Speech is one of our primary means of communicating with each another. It is the conduit for spoken self-expression. A combination of vocabulary, voice and experience gives each person their unique oral signature. This is who they are. It is an integral part of what carries their being, their presence into the world.

The speech activities focus on gaining and refining personal communication or presentation skills.

Drama extends speech. To dramatize is to enact.

Drama takes speech into the realm of the imagination and theater. Its activities focus on stepping into other worlds or experiences, i.e., acting.

It teaches empathy. Handled well, drama builds self confidence through providing opportunities for a child to experience the world from perspectives other than his own. In doing so, he does not become an egoistical show-off constantly needing applause, something many parents fear. Instead he becomes humane.

Many of us talk to or talk at a child. We give instructions like "Clean your teeth!" or "Pick your toys up!". This type of communication is very different from talking with.

To talk with implies you are actively making room or time to listen to their side of the conversation.

Pick a well known tune and have fun. 'Old Macdonald Had a Farm' works well.

Here are 8 beloved classic children's poems to get you started. Click the link and you'll find activities, audio, as well as a printable of them all.

19 drama suggestions & activities to build self esteem in a child

I found the more definite the costume, the less it appealed. The more flexible the items were, the more readily they were put on. The cloak was magical one day because it made the wearer invisible and the next it became a glamor item for going to the ball.

Also favored were discarded 'father' or 'mother' clothes. These allowed children to experiment with being adult.

For more see "What Does Too Much Screen Time Do to Children’s Brains?" by Jennifer F. Cross, M.D., Pediatric Behavior & Development

We've eaten dinner with spare chairs and places set for invisible guests who asked for special foods. I remember a toy train that talked, a teddy bear who threw temper tantrums...

In a classroom setting this can take place as a natural extension of a lesson or as a lesson in itself.

If you're a parent at home looking for simple drama exercises to help build confidence try these:

Please do not ask a child to do things you are unwilling to do yourself. If you are nervous about speaking up in public and show it through criticism or throw-away comments, you feed and normalize the fear a child feels. They'll pick up your anxieties very quickly.

If this is you and you want to help build esteem in the children close to you, be prepared to overcome, or at least own, your own doubts and insecurities.

An absolutely safe and supportive way for you to do this is to join a local Toastmaster's Group. This is an international not-for-profit organization dedicated to helping people become confident public speakers. You'll find them fun, interesting and challenging as well.

You'll learn new skills, meet new people and soon be doing all sorts of public speaking you never thought possible. Look on the website. You're bound to find one near you. Ring and join them.

If you're a teacher reading this and you have a fear-filled child plus a curriculum demanding that they give solo speeches, take the time to make it easier for them by:

Do you need help with speech topics suitable for children?

There are dozens of speech topics for kids here, ready for you to take as is or adapt for your own needs.

Or check here for more public speaking games. You'll find activities to adapt as well as ongoing links to more.


Breaking the cycle of fear in adults

Maxwell Maltz (1889-1975), author of "Psycho-Cybernetics" said, "Low self-esteem is like driving through life with your hand-brake on."

If you've got the hand-brake on and want simple effective strategies to remove it and boost your self-esteem read this article from the Cornerstone Edu blog: Life Long Learning Matters.